Read the text and answer questions 1 to 6. 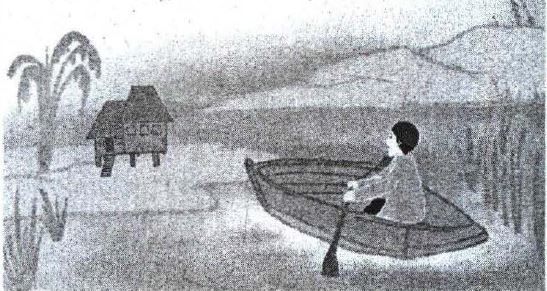 Once upon a time there was a young man called Lebai Malang. He was still a bachelor. He lived in a village near a river in West Sumatra.

One day Lebai was very confused because he was invited to attend two parties. One was in the the Northern village and the other was in the Southern. He knew that the people in the Northern village were clever at cooking. Whatever they cooked it tasted very delicious, but on that day they killed just one buffalo. On the other hand, the people in the Southern village couldn't cook. Whatever they cooked it tasted salty, but they killed so many buffaloes, goats, and deer.

Then, he returned home. When he got home, he saw just rice, no side dish. So he decided to go fishing. He took his fishing rod and put some rice inside a banana leaf. After waiting for an hour, he didn't catch any fish while he felt very hungry. When he would open the banana leaf, the boat moved and the rice fell into the water. Since then, all the people called him unlucky teacher or Lebai Malang.

jawaban yang benar adalah C. should not be choosy.

Jawaban dari soal ini adalah C. should not be choosy.

Jadi, jawaban yang benar adalah C. should not be choosy.

What can you learn from the story?

What can we learn from the story above?

Read the following story and answer the question.     Once upon a time in Sumatra Island, there was a handsome man named Batara Guru Sahala, who enjoyed fishing so much. One day, he caught a fish. H...

What is the purpose of the text?