How many passive sentences can you find from the text?

Read and study the text below. Then, answer the questions. 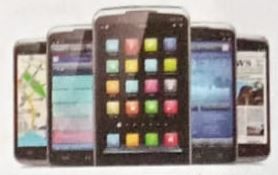 The first mobile phone networks were created in the late 1970s in Japan. A cell phone combines technologies, mainly telephone, radio, and computer. Cell phones work as two-way radios. They send electromagnetic microwaves from base station to base station. The waves are sent through antennas. This is called wireless communication.

There are different kinds of phones. A flip phone flips open, and is best for calling. A bar phone is shaped like a candy bar, and the keys and screen are on one face. A slate phone is a phone that has almost no buttons, and uses a touchscreen. Most smartphones are slates. A slider phone slides on rails. It can slide out number keys or a mini keyboard, but some do both. A swivel spins on an axle.

Many 21" century mobile phones are smartphones. These phones can be used for email, browsing the internet, playing music and games, and many other functions that computers can perform. This is because mobile phones basically are small computers. Older phones also used computer technology, but lacked many of the components of a computer that were too big to fit into a phone. Modern phone makers have been able to use smaller components. Most smartphones are also GPS receivers and digital cameras

How many passive sentences can you find from the text?

jawabannya adalah "There are five passive sentences in the text".

Jadi, jawabannya adalah "There are five passive sentences in the text".

Gardenia plants are popular for the strong sweet of their flowers. Gardenia is the national flowers in Pakistan, In Japan and China, the flower is called Kuchinashi (Japanese) and Zhi zi (Chinese).  ...

Translate the text above into bahasa Indonesia!

Gardenia plants are popular for the strong sweet scent of their flowers. Gardenia is the national flower in Pakistan. In Japan and China, the flower is called Kuchinashi (japanese) and Zhi zi (Chinese...

Crocodiles are rather 'lizard-like' animals. They have long tails and the limbs are short and straddled sideways. They are large reptiles that live (44) ... water. Crocodiles generally inhabit freshwa...