Complete the text below with the correct words in the box. Then read the text loudly.

After the students are ready to study, the ____ (8) teaches them about the names of the things in the classroom. 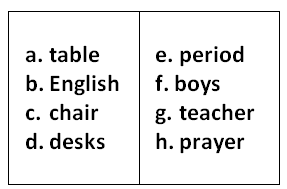 The writer describes her house to show ____.

Write a short description of a particular person, place or thing.

What is the writer's purpose to write the text?