Complete the mind map below based on the text in Activity 3.

This is the information about Saturn that Ed and Ellie find in the book. Let's read it.

Saturn is the sixth planet in the solar system. When it is seen through a telescope, it is the most beautiful planet.

Saturn is the second largest planet in the solar system. Its mass is 95 times that of the Earth. It has a diameter of 75,098 miles.

Saturn is made of hydrogen gas, helium gas, and methane, plus ammonia. You could not stand on the surface because it's gaseous. As a gas giant, Saturn doesn't have a true surface. The planet consists of mostly swirling gas and liquids. The extreme pressure and temperatures deep inside the planet, melt, and vaporize spacecraft trying to fly into the planet.

Saturn is blanketed with clouds that appear as faint stripes, jet streams, and storms. Winds in the upper atmosphere reach 1,600 feet per second. In contrast, the strongest hurricane-force winds on earth reach about 360 feet per second.

Saturn's most distinctive feature is the thousands of rings that orbit the planet. The rings are made of chunks of rock and ice. The rings are very wide, it's about 150,000 miles in diameter but very thin, only a few hundred yards thick.

Saturn spins much faster on its axis than the Earth. The Earth completes one rotation (turning) on its axis in 24 hours, turning away from the Sun and back again to give us night and day. Meanwhile, Saturn completes a full rotation just over 1 0 hours.

Adapted from: many sources

Complete the mind map below based on the text in Activity 3. 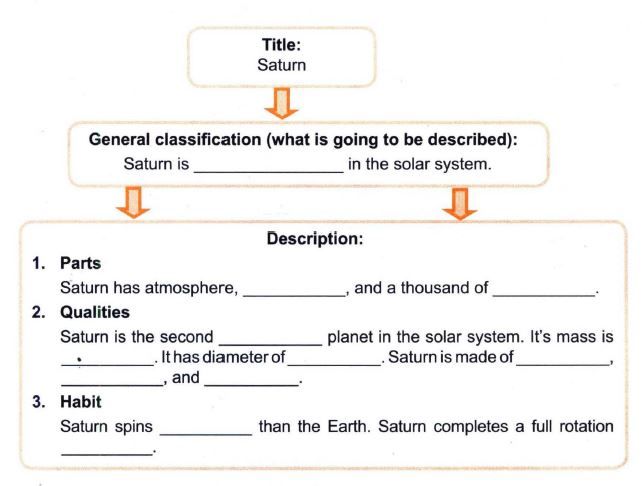 General classification (what is going to be described):
Saturn is the sixth planet in the solar system.

1. Parts
Saturn has atmosphere, gaseous surface, and a thousand of rings.

2. Qualities:
Saturn is the second largest planet in the solar system. It's mass is 95 times of the Earth. It has diameter of 75,098 miles. Saturn is made of hydrogen gas, helium gas, and methane, plus ammonia.

3. Habit
Saturn spins much faster than the Earth. Saturn completes a full rotation just over 10 hours.

Write a report draft about sky objects based on the mind map in Activity 10.

Read information about parts of a factual report. Then label the parts of the following text.   Factual Reports Factual reports provide factual information, but exclude opinions. They consist of thr...

Divide your class into six groups. Each group will describe one of animals from Indonesia (Javan rhinos, anoa, bekantan, Sumatran tigers, Bali starling, or Komodo dragons). Search for the information ...

Write a simple report text about an animal!

Complete the mind map below based on the text in Activity 2.