Complete the following letter with suitable words from the box.

I (4) ____ from LPK Bina Sejahtera, majoring Sales Administration in 2018. I have developed my (5) ____ and qualities through studies and internships. Through internships, I have experiences for real work at a company. I have the ability to work (6) ____ and a pleasant personality. I am (7) ____ in communication skills and computer literate. I am good at both written and spoken English. I am (8) ____, creative, and energetic.

I enclose my curriculum vitae, a photocopy of the latest certificate, identity card, and references. I would welcome (9) ____ for an interview. I look forward to hearing from you. Thank you. 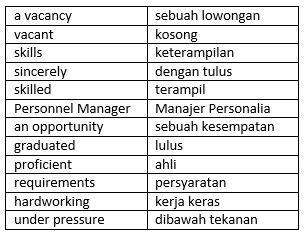 Is the applicant qualify for the position? Why?

Complete the application letter below. This letter is sent to apply a position of Bahasa Indonesia's tutor in a branded course institution. a. qualified candidate b. teaching techniques and instruct...

Do the task. Make an application job letter based on a situation below. You saw a job vacancy in the jobvacancy.com to become an English Translator in PT Maju Kencana. You are a fresh graduated ...

The text is for question below. If you were the recipient, which part of the cover letter would attract you?