Answer the following questions based on the texts in Activity 15. What is the color of the wings?

Read the following texts and study the tables of analysis. 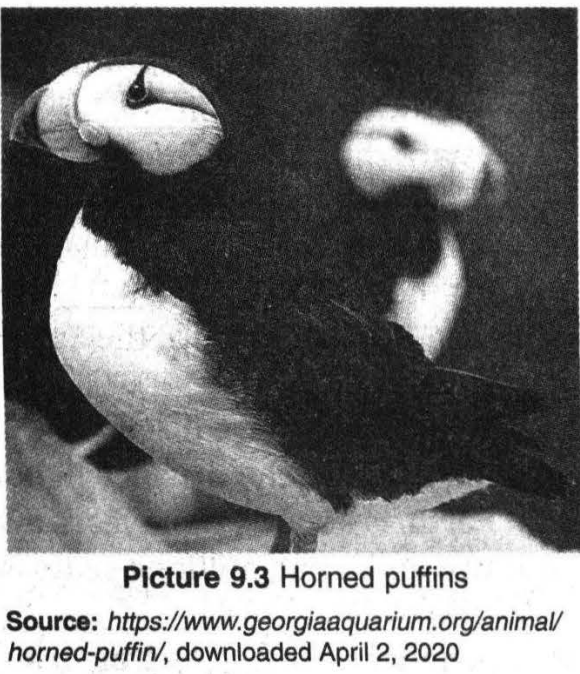 The horned puffin is named for the characteristic black projection over the eye. Puffins, like guillemots and murres, belong to a group of seabirds known as auks or alcids. Puffins and other alcids are well adapted for life on the ocean.

Coloration is black on the back, around the neck, and on top of the head with a white face, breast, belly, and under the tail. These kinds of puffins have orange to red legs and feet They have dark, hornlike projection from top of eye and thin, dark line from eye to nape. They also have very large, colorful bill The bill is yellow at base and red at the tip. After breeding season, undergoes annual molt which takes place in fall to winter. Colorful outer part of bill is shed, leaving behind the smaller, duller true bill. Face patch is gray and the horn above each eye disappears. Male and female are similar in appearance, but the male is larger. Juvenile appears similar to adult with a smaller, darker bill.

The horned puffins live in a pelagic seabird They spend much of  the year off shore; returns to the coast in the summer to nest and raise chicks. During breeding season, they are found along sea coasts, rocky cliffs, and offshore islands. Meanwhile, during non-breeding season, they range over adjacent water usually only to the edge of the continental shelf.

The horned puffins capture prey-such as a wide variety of fishes, including juvenile herring, capelin, sand lances, and sometimes salmon and cod as well as squid, crustaceans, and polychaetes (marine worms)-- by surface diving. They may dive up to 80 feet (24m) in pursuit of prey. They forages over water close to breeding colonies, unless iced over. They may carry more than one fish at a time in its bill The average catch is about 10 fish, but some may carry more than 60.

Answer the following questions based on the texts in Activity 15.

What is the color of the wings?

The estuaries at the beach are used as the place for ____.

What is the term hospital derived from?

Answer the questions. Where is the durian from?

Answer the questions. Why are coconut palms very useful?

Answer the following questions based on the texts in Activity 15. What are kidneys like?