Read the text and answer the question. 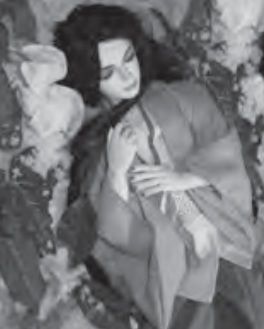 Many years ago, when great forests still covered the hills of Japan, a samurai named Hikaru lost his way in a sudden winter storm. Snow pellets sharp as spears pierced his cloak and drove him blindly into the deep woods.

Cold stalked him, and he had no weapon to battle this inivisible enemy. Finally his horse burst into a clearing. The wind rattled the tree limbs, but no snow fell here. A wooden house squatted beside a huge camphor tree. The snow was a smooth white carpet. This quiet place seemed peaceful enough, but he sensed someone watching, waiting in silence.

A door opened. A white-haired woman studied him. Holding out her arms, she murmured, “Welcome, my lord. Enter and feel no fear.” Hikaru smiled. He had killed fear long ago. But his horse ran away from the tiny hut. The samurai pulled the reins and drove it forward until the horse reluctantly moved forward. He found a lean-to built on the side of the hut, sheltered on one side by the hut and on the other by the tree. When his mount discovered some hay, its hunger drove out all fear. He left the animal peacefully grazing and went to fi nd his hostess.

The hut was simply furnished, though fi relight created a golden sparkle off the dishes and cups she set before him. Where had this woman found such luxuries, he wondered as she silently served him.

She kept her gaze modestly lowered. “I am called Yuki, my lord. This place is my home.”

Yuki glided around the room in a silken whisper. Gradually he became aware of how quiet the woods had become. “Are you not lonely here?”

Her lips quirked in a shadow of a smile. “You are here, my lord. As long as you are pleased with me, how could I be lonely?”

Time passed, but it was always winter. Hikaru forgot everything but the lovely woman who anticipated his wants. As soon as he thought, “I want – “ Yuki was there, offering food and drink to fill his belly or song to soothe his soul. Yet men are never content. For a warrior, even an earthly paradise can become a wicked prison.

One day, Hikaru woke with anger. Nothing Yuki said or did pleased him.

Dashing dishes off the table, the tiny crashes echoed how he’d destroyed his enemies in the past. The memory infl amed his temper. Enough of this quiet and inaction! He could find that in death.

“You, woman!” he snapped. “You’ve kept me prisoner in this place far too long!”

He rushed to the door and fl ung it open. A cold breeze brushed his cheek. Yuki grasped his sleeve. “My lord! Do not leave!”

“Enough!” The samurai jerked from her grip. Rage boiled in his heart as he backhanded her. “Out of my way, woman!”

“As you wish.” The mark of his hand seemed a dark bruise on her pale skin. “I will bother you no more.” Head bowed, Yuki stepped aside. The door swung shut between them.

A low moan shuddered amongst the trees. Wind whipped his helm from his head and his cloak off his shoulders. Cold knifed his body, just beneath the heart.

“Yuki?” Blinded, Hikaru stumbled backwards, but tree bark scraped his questing hands. Where was the hut? It was cold, so cold.

Spring came late that year. Birdsong welcomed the sun’s return. The golden fi ngers of the  goddess Amateratsu caressed the still alabaster face of the sleeping man. But he never wakened. As she continued her journey across the sky, cherry trees covered the silken clad form with tiny pink-edged petals, a living blanket of snow.

jawabannya adalah "Hikaru is a samurai".

Where does the story come from?

What happened to him?

How was the weather then?