Who are the characters in the story?

The following text is for questions 21 to 25. 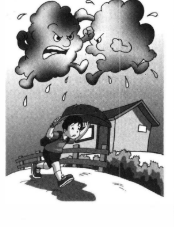 Once upon a time, there lived a Cloud family. Papa Cloud, Mama Cloud and the Cloud children lived quietly in the sky.

Every morning, the Cloud children went to the sky playground to play on the slide. Since there was only one slide, they had to take turns on the slide. Lady, the youngest Cloud child , looked impatient. He could not wait for his turn to come. His brother, Tody, didn't like his attitude. Suddenly, they quarrelled . Their white bodies became grey. It meant they were very angry. When the clouds were angry, water usually came out of their bodies. It meant rain for the people on Earth .

"You can play on the slide in turns. Now, shake hands. Both of you!" ordered Papa Cloud.

Lady and Tody shook hands and slowly their colours changed. Their bodies
became fair and white again. The rain stopped and people on Earth could go on with their activities again.

Who are the characters in the story?

The children had a quarrel because ....

Once upon a time, giant named Kbo Iwo lived in Bali. He helped people building temples and villges, digging ditches, and cutting terrace out of the hillsides for rice paddies. All he asked for his hel...

Read the text and answer the following question. The Ant and The Dove      An ant went to the river bank for a drink. The unlucky ant fell into the water and almost drowned. A dove was sitting in a...

In ancient times,  the king placed a boulder on a roadway. Then he hid and watched to see if anyone would remove the huge rock. Some of the king's wealthiest merchants and courtiers came by and simply...