What is the main idea of the first paragraph? 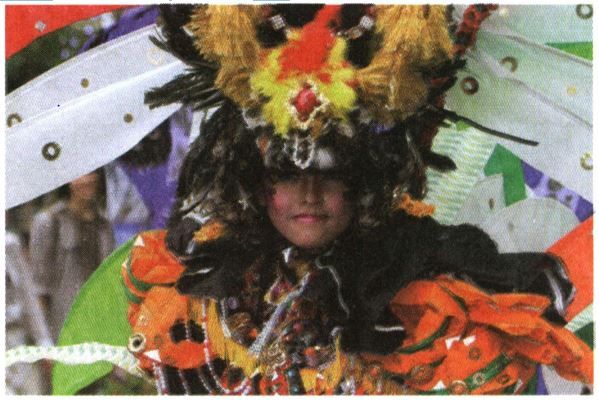 Attractive carnival model from Jember Fashion Carnival posing and dancing during the opening ceremony of a new mall in Kuningan business district, Jakarta, on Dec. 17, 2011.

Jember Fashion Carnival (JFC) 20 17 that was held from August 9 to 13 managed to attract thousands of photographers from local and international media companies as well as photographer communities.

"There are thousands of photographers who signed up for a permission to cover this event and there are still others who don't sign up. They all come from East Java, national and foreign media companies. There are also hundreds of photographer communities," said JFC president Dynand Fariz.

Dynand also mentioned that several foreign photographers have registered via online, "Regular photographers ought to pay for an entrance ticket but media people can get in for free," Dynand added.

"JFC is such an amazing event that I'm doing a documentary movie about it," said Garry Talbot, a UK-based TV journalist. "We are mesmerized with the extraordinary ideas and the costumes. I'm very interested in the performers," he added.

Another visitor from Switzerland named Clo Meunier, who came for the first time, echoed the opinion, "These participants have made such incredible costumes and they made them by themselves even though they're not a designer. The costumes showcase Indonesian culture. I hope I can visit Jember again next year to watch JFC."

This year's festivity also commemorated the appointment of Jember as a carnival city. Tourism minister Arief Yahya said that Jember Fashion Carnival that has been held for 16 years has inspired other carnivals across the archipelago and have brought home so many international awards and recognitions.

"Everyone admits that JFC is a world-class event which is why tourism ministry has appointed Jember as a carnival city. By turning it into a carnival city, the commercial and financial values will increase," said Arief.

What is the main idea of the first paragraph?

The Jakarta Post - Saturday, October 13, 2012. Juve assistant has been cut Rome: Juventus assistant coach Angelo Alessio will be back in the dugout for the Serie A champions next weekend after the I...

What is the main idea of paragrapah 1?

ASSOCIATED PRESS/LONDON   Ryan Lochte and Sun Yang were among the few who weren't concerned about getting wet when heavy rain saturated London Olympic Park on Sunday. After a week of sunshine, rain...

JAKARTA: National flag-carrier Garuda Indonesia begins its new flight service on Monday morning in an effort to expand its international networks. "We believe the opening of this route will further d...