My Grandpa’s Funeral in Toraja 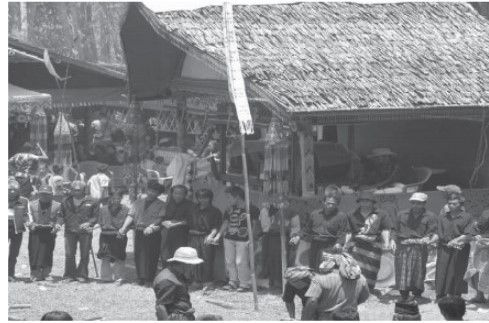 Last month my family and I went to Toraja to attend Grandpa’s funeral. It was my  first time to go to such a ceremony. We gathered there with our kin in the ceremony.

Overall, the ceremony was quite elaborate. It took about a week. Several days before the ceremony was done, grandpa’s body was kept in a series of houses arranged in a circular row around an open field called tongkonan. His corpse was dressed in a  fine wearing.

The funeral was performed in two phases. First, we slaughtered the pigs and buffaloes, and then moved the corpse to face north. In this ceremony we wore black clothes. After that, the corpse was placed in a sandal wood coffin. Then, it was brought out of the house and placed on an open platform beneath the granary. Meanwhile, my uncle, my brother, and I prepared the wooden puppet and a funeral tower called lakian. The next phase of the ceremony was held in this place. The coffin is borne from the house and placed in the lakian. During the day, there were also buffalo matches. They were great matches. In the night, we were feasting, chanting, and dancing.

On the last day, the grandpa’s coffin were lowered from the funeral tower and brought up to the mountain side family graveyard. It was followed by great shouting and excitement from the relatives and the guests. Finally, we installed the wooden puppet on a high balcony where other puppets representing the members of a whole family were already there.

The funeral ceremonies made my family and me tired. However, we were grateful because it ran smoothly.

jawaban yang tepat adalah " my family and I ".

jawaban yang tepat adalah "my family and I".

Jadi, jawaban yang tepat adalah "my family and I".

Who was sick at that time?

" ... his wife always made soup for lunch and a cup of hot coffee forhimin the afternoon.” What does the word ‘him’ refer to?

What kind of day the writer get last Monday?

2. What is the first paragraph about?