Complete the following statements based on the text. 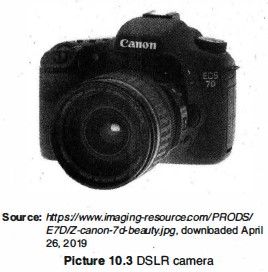 This time you will learn about how to make a great photograph using automatic mode in a DSLR camera. Rather than put it into manual mode, you can put it into an automatic mode for a practical reason. You are still able to get (1) ____ by using the camera's automatic mode with understanding the basic of photography such as lighting, shutter speed, ISO, and type of lenses. You can follow the following steps to get better photographs.

First, you need to hold the camera (2) ____. You can use a tripod or any stable surface that will eliminate the (3) ____ because of the shake. You may also use the self-timer feature if you want to take selfie photos.

Second, before you press the shutter button, you need to (4) ____. Nearly every digital camera utilizes auto-focusing, but you have to use it properly. You can press halfway the shutter button to activate the (5) ____.

Next, you can utilize the zoom feature of the camera for taking a (6) ____. Use only optical zoom. Never use the digital zoom for creating an artistic photo. It will decrease (7) ____. You can
physically get up-close to a subject instead of zooming in digitally.

Finally, digital cameras tend to always fire the built-in flash when in (8) ____, whether it's
necessary or not. However, (9) ____ is not always a bad thing. Occasionally, it distorts the photographs to be not natural. Try to get (10) ____ for better photographs.

Think about it. Before you read the following text about how to breed leopard geckos, answer this question. Have you ever read anything about leopard geckos?

Arrange the sentences below into a correct and meaningful paragraph! Nori is the dark green seaweed used to wrap sushi and California rolls. Finally, you can also sprinkle thin strip of salty...

What make our device consume a lot of power?

Arrange these sentences below into a good paragraph. HOW TO TIE A NECK TIE First of all, start with the wide end on your right. Secondly, cross the wide end over the narrow, and back under...

Task: Do the comprehension questions. Answer the following questions by referring to the text about the photoshop above Do you think the text is originally finished or it is continued other info...