Observe the text of the song below and try to understand what messsage is inside the song. Answer the questions below. However, complete the song first with the words provided in the box. 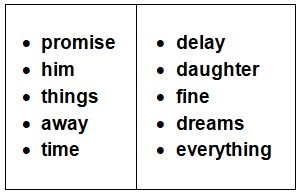 What is the song lyric about?

What are last words of each line?

What is the moral value of the above song?