The following text is for questions 26 to 31. 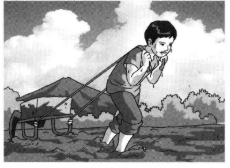 Once upon a time, there were three young brothers who lived with their father in a small village. Their father was old and always sick. The Old Man knew that he was not going to live long, so he tried to divide his wealth among his sons.

"Listen, Sons. I'm going to leave you this small hut and that small farmland out there for all of you. The buffalo is for you, Kirno," said The Old Man to his first son.

What about me, Father?" asked Beno, the second son. "You can take care of our plough," said The Old Man. "And you my little son, I give you this small bag of rice seed." "Thank you, Father, " said Gito, the third son. "All of you can change your destiny with all the things I give you. However, you must help each other and remember that the sun rises in the east and sets in the west," muttered the old man.

Those were the last words from The Old Man to his sons. A few hours later, The Old Man passed away.

The day after the old man died, Kirno went to the market to sell his buffalo. Gito ran after him, trying to remind him about their father's will, which asked them to help each other. But, Kirno ignored him. Beno also sold the plough and enjoyed the money himself. Kirno and Beno did nothing but spend their money. Gito was very upset, but he wanted to become a good farmer like his father. So, he borrowed a plough from his neighbour. He had to plough the farmland by himself because he did not have any buffaloes. He worked so hard from sunrise until sunset. After seven years of working hard, Gito became a successful farmer. But he was not happy because he kept thinking of his brothers. He looked for his brothers everywhere, but still, he could not find them.

One day, Gito went into town to buy some farming equipment. When he was about to leave the shop, a beggar asked him for some money and a pickpocket tried to take his wallet. These people were actually Gito's brothers. Gito recognised them at once. Feeling very happy, Gito quickly hugged them. In the end, Gito told them that he had become a successful farmer. He also invited them to stay in his house. Kirno and Beno felt ashamed before Gito. They realised that they had made a terrible mistake in the past.

The underlined word means a person who ....

What is the purpose of the text above?

Once upon a time, giant named Kbo Iwo lived in Bali. He helped people building temples and villges, digging ditches, and cutting terrace out of the hillsides for rice paddies. All he asked for his hel...

"Do not tell anyone that I helped to save your life." (Last paragraph) Why did the farmer say so?

How did the story end?

The old Man and the Durian Tree In a very quite little village, lived an old man whose age was over 80 years old. He was planting a durian tree when a neighbour observed him. The neighbour asked the ...