Work in pairs. Read the text below and complete the gaps with the correct form of the verbs in brackets. 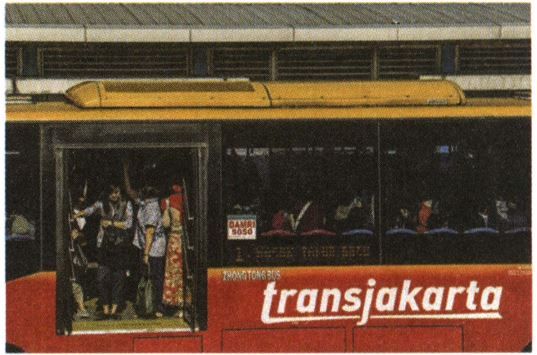 Public transportation provider PT Transportasi Jakarta (Transjakarta) 1) ____ (purchase) 300 low-entry buses this year to help disabled people get around the city. Transjakarta president director Budi Kaliwono said the company 2) ____ (order) the buses in 2016 but they still had to be manufactured.

"This year we purchased 300 and now they are still 3) ____ (assemble). The buses will be [put into operation] gradually starting in July. I hope we can make it," Budi said Friday, as quoted by kompas.com.

The buses 4) ____ (consider) friendly to people with disabilities because their low entries mean their floors are on the same level as the pavement. The buses, which cost Rp 2.4 billion (US$ 1 8,000) each, will not 5) ____ (operate) in busway corridors.

Budi 6) ____ (add) that there would be 15 to 20 routes served by the low-entry buses -- mostly on large roads that can accommodate bus stops.

The money to purchase the buses 7) _____ (come) from a government investment participation (PMP) fund 8) ____ (own) by Transjakarta and loans from banks. With more buses, the company hoped to serve 185 million customers by the end of the year. (wnd)

Bernard, a 34-year-old man, found guilt after murdering his wife. Bernard was sentenced to death. He said he loved his wife. "I love her and did everything for her, but she cheated on me," he said. ...

Read the following headlines. Do they reflect happy or sad news? 9. A Famous Gadget Company Released a New Product

An Alliance Could Answer The Growing Threat from Google and Facebook By Evelyn M.Rulsi and Nick Bilton   Apple, which has strumbled in its efforts to get into social media, has talked with Twitter i...

Complete the following text of news by choosing the correct words in the box!     Death toll in China landslide       Rescueres have (1)____the body of a final missing person in northern China (2)...