An old man named Takahama lived in a little house behind the cemetery of the temple of Sozanji. He was extremely friendly and generally liked by his neighbours, though most of them considered him a little mad. That was because he was very old, but he did not want to get (1) ____

One summer day he (2) ____ very ill. So, that for his sister-in-law and her son. They both came and did all they could do to bring comfort during his last hours. While Takahama fell asleep, they (3) ____ a large white butterfly flew into the room and rested on the old man’s pillow. The young man tried to drive it away with a fan, but it came back three times, as it if was very loath to leave the sufferer.

At last Takahama’s nephew chased it out into the garden, through the gate, and into the cemetery beyond. Where it lingered over a woman’s tomb, and then misteriously (4) ____ On examining the tomb the young man (5) ____ the name “Akiko” written upon it, together with a description narrating how Akiko died when she was eighteen. Though  the tomb was covered with moss and must have been erected fifty years previously, the boy saw that it was (6) ____ with flowers, and that the little water tank had been recently filled.

“Akiko” (8) ____ his mother. “ When your uncle was young he was (9) ____ to Akiko. She died shortly before her wedding day. When Akiko left this world your uncle resolved never to marry, and to live ever near her grave. For all these years he has remained faithful to his vow, and kept his heart all the sweet memories of his one and only love. Every day Takahama went to the cemetery, whether the air was fragrant with summer breeze or thick with falling snow. Every day he went to her grave and prayed for her happiness, swept the tomb and set flowers there. When Takahama was dying, and he could no longer perform his loving task, Akiko came for him. that white (10) ____ was her sweet and loving soul. 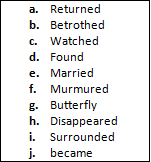